We recently became affiliated with Mediation.com to promote the use of mediation to resolve disputes instead of litigation.  The areas of elder law, estate administration, family business and pet related disputes are best solved by mediation where there is a chance of preserving the relationship between the parties.  Litigation can be costly, consume years of your life and rarely ends up where the parties can be reconciled.

In addition, Mediation.com offers a blog content service.  Even though I create a lot of content on my own, I thought it might be nice to get some help.  Look for future blog articles and information about how you can protect yourself and your loved ones.

The most amazing thing happened yesterday!  You might remember I mentioned I tried to adopt a puppy - Curry (one of the spice pups) from a rescue while I was recently visiting in Virginia.  She is a husky/Labrador mix and something about her picture just said, "pick me!"  So I tried, but it wasn't meant to be.

Not one to give up too easily I continued to correspond with the rescue group.  I offered to adopt the mother - Jupiter, but she was already adopted too!  Her story sounds like a sad one - she spent most of her life chained to a porch.  Then she had this litter of puppies and the owner decided to give up the mother and the puppies.  Only, she didn't turn over all the puppies - she kept three now known as Pepper, Coriander and Wolfsbane. 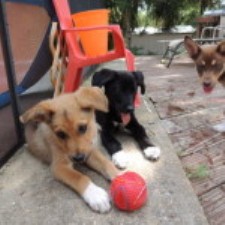 I had been corresponding with the rescue via my gmail account - one I don't check very often.  Well, I just happened to check it the other day and there it was!  An email asking whether I would be interested in any of these three new puppies?  OMG!  Interested, I went crazy.  So, you can probably guess from the title of this post, which puppy I chose - Wolfsbane!  Not sure I love the name but we can work on that after we meet.

To me, he is just the cutest.  Oddly, I wanted a female puppy but after hosting Pete this last week, I was really feeling like a little boy puppy would be okay.  I know, there are puppies everywhere!  And believe me I've been looking diligently with the help from a few of my friends (Pam Fore, Lisa Dietrich, Kathleen Flammia, Gayle King and a few more).  But, I really felt like I had a weird connection to this litter and now it is actually going to happen. 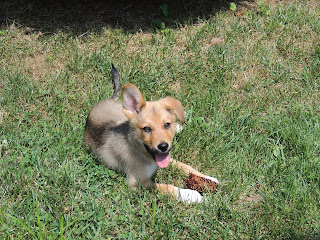 So here's the plan - I fly to Baltimore, MD on Friday (next), pick up the puppy on Saturday morning and fly home on Sunday!  Guess who will be coming to work with me on Monday???

Posted by Peggy Hoyt at 7:51 AM No comments: