The Oregon coast in less than 48 hours

Kathleen Flammia and I recently attempted the near impossible - to see, explore and experience the Oregon coast in a limited time frame. In our case, we had just about 48 hours.

We arrived at the Portland airport late Wednesday afternoon. Hertz "upgraded" our reserved choice to a "mom mobile" - a minivan. Rather than argue we accepted the substitution expecting that ultimately it would just become an interesting part of our story and journey. At least we would have plenty of room for all of our stuff.

Since our stomach clocks were off by virtue of our three hour time change, our first order of business was to locate somewhere for "lunch". Not having a clue where to go, we took our chances at a nearby exit off route 26. We fortuitously discovered Rock Creek Tavern, a quaint restaurant and bar that met our needs perfectly. We enjoyed hard cider, spinach and artichoke dialing with an assortment of hummus, olives and pickled veggies. 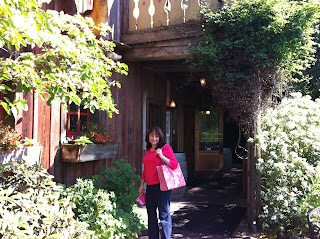 We arrived at Arch Cape Inn near Cannon Beach about 6 pm. I had chosen this destination from an Internet search and we were not disappointed. We were warmly welcomed by Cynthia, our hostess and innkeeper. We were introduced to fellow travelers checking in the same time - a couple whose company we came to enjoy. We were shown to our very clean and comfortable accommodations. Since we had missed the inn's happy hour, we were promptly offered a bottle of locally grown merlot. Thank you Cynthia. 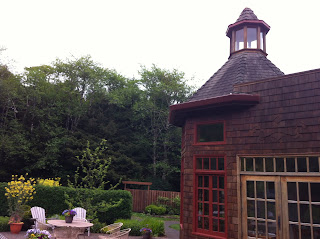 We ventured into Cannon Beach for a look around and to get our coastal bearings. We decided on the Wayfarer for dinner. What a great choice. Our waiter was attentive,adorable and entertaining. He used the orders of our neighboring table to introduce us to select menu items as they were delivered. Charming idea and a good sales pitch because we ended up with eyes larger than our stomachs. We ordered drinks, good local wines - a reisling and pinot noir, along with garlic French fries, pea tendrils with scallops and a shared entree, local Rex sole encrusted with local grown nuts and assorted vegetables. Way more food than we could possibly ever eat. The leftovers went back to the inn for the innkeeper's pets. 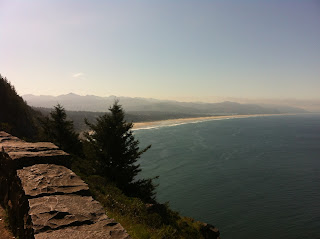 Breakfast was awesome. It started with broiled cinnamon grapefruit, fresh orange juice and coffee. Next was an egg and zucchini frittata (for non-vegetarians, a slice of ham) was also included) This was followed by a gluten free biscuit with fruit purée and Greek yogurt. We were stuffed and happy.

Then we were on the road, an unhurried journey down the coast with no itinerary except to arrive at Heceta Head Lighthouse B&B, our destination for the evening.

We pulled over frequently just to experience the gorgeous views. We tried to follow a scenic cape route and got the opportunity to see several beautiful and historic lighthouses. There are supposedly 16 of them on the oregon coast. 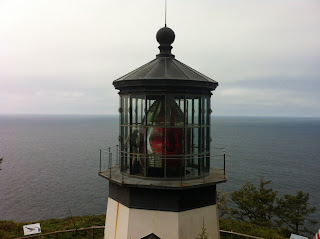 We stopped in Depoe Bay, known for its whales. We saw none but had an opportunity to buy a few baubles at a local gift shop. 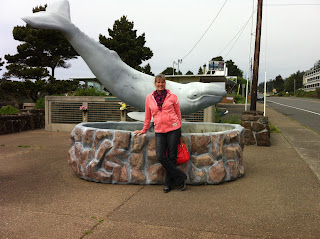 We also made a visit to the Tillamook Cheese Factory.  This was fun and if you've never had squeaky cheese curds, then you are truly missing something. 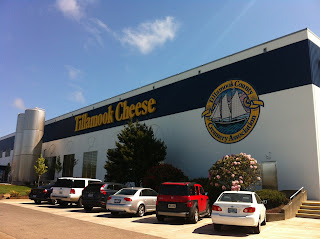 One desired destination was Mo's in Newport. Mo's is famous for its clam chowder and it did not disappoint. We had clam chowder, rich and buttery along with shrimp salad and grilled shrimp. Kathleen could not resist their brownie sundae desert. We met a couple of Newport dogs including Jake, a beautiful, if not chubby, Golden Retriever.

Ultimately we arrived at Heceta Head Lighthouse, just south of Yachats, but north of Florence and very near the Sea Lion Cave, tourist attraction. We were a little confused initially because we never received the promised "secret directions" that were supposed to accompany our reservation confirmation. We could see the lighthouse from the public park but couldn't figure out how to get there except possibly via an entrance marked "private drive.". Kathleen, a good law abiding citizen was concerned for our safety but we took our chances and were relieved to discover it was in fact the right choice.

There was no one around upon our arrival, just a note on the door advising how to access the key and find our assigned room. Fortunately we stopped in Yachats for wine and we enjoyed a restful interlude on the front porch watching g the waves break on the rocky cliffs below. Eventually we met Christine, our hostess, who recommended a trip into Florence for dinner. We determined not to eat again at Mo's but to venture out and try another venue. We decided on Kelly's Cantina because it had a nice riverfront view. The food was edible but nothing to write home about. Kathleen had a nice salad and lobster. I had roasted red pepper soup and abet and goat cheese salad.

The lighthouse is rumored to be inhabited by a ghost named Rue. We didn't meet her personally but did hear that she had been active on our day of arrival. That might explain the voices and music we heard when we were still the only guests on the premises. 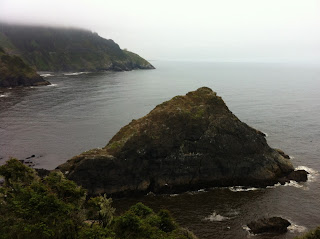 Breakfast at the lighthouse is definitely the high point. It is seven incredible courses, starting with fresh fruit and yogurt along with orange bread. Next was a to die for dungeness crab cake. This was followed by a fruit frappe as a palate cleanser. The main course was an egg frittata with fresh vegetables and a side of local sausage (none for me). Then as a final note there was cheese blintzes, fresh pear and blue cheese. Can you say full? And very satisfied. We both bought their signature cookbook so we can share these recipes with friends and family.

We did manage to trudge up the hill to the lighthouse, now under restoration, so closed to visitors. We met a nice volunteer who told us about the area and how he and his wife are maximizing their retirement through volunteer activities at state parks (see www.volunteer.gov).

We couldn't decide whether to go to the sea lion caves on our way out of town and succumb to the tourist trap temptation. I prevailed so that at least we would stop and inquire whether there were any sea lions in residence. We met a couple outside who showed us a passing whale mother and her calf (a real highlight of our trip). We also saw some free swimming seals so decided to pass on the paid version of the caves.

From Florence we headed east toward Eugene. What a beautiful drive. We planned to wind our way back to Portland via the Oregon wine country know for its award winning pinot noir grapes and resulting wines. Kathleen identified the Benton Lane winery, a family owned, award winning winery offering free shipping (a bonus) through the end of May. We tested all of their labels and ultimately purchased an entire case (with Kathleen purchasing the lion's share). We even got lucky enough to meet the owner, Steve, and have our picture taken.

As if we hadn't already eaten enough, we were ready for a late lunch by the time we got to Salem. We settled on Mexican at Hacienda Real. We enjoyed it while we there but Kathleen ended up paying for our decision later with a serious stomach ache.

We ended our whirlwind tour with cocktails at Tasty & Alder and a social get together with Cryonics friends at Gruen. Whew, after getting desperately lost in downtown Portland we finally arrived at our destination for the balance of the trip, Aloft at Cascades Station.
Posted by Peggy Hoyt at 7:57 AM No comments: