Teresa Morgan and Friends Complete the The Disney Wine and Dine

On Saturday October 1, 2011, Teresa Morgan and friends, Missy Lee, Debbie Roser and me (Peggy Hoyt) participated in the Disney Wine and Dine Half Marathon! What an experience. 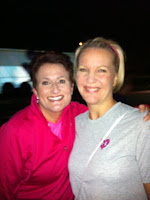 We arrived at Disney's Wide World of Sports Center at 3 p.m. to pick up our packets. They were very organized, everything was computerized and the whole process went really smoothly. They had a great Expo with lots of vendors - things to learn about and lots of things to buy! Of course, we couldn't resist and sent some dollars into the local economy. The Expo closes at 4 p.m. so we then headed over to our hotel at the All Star Resort Music Hotel.

Our plan was to get settled in our rooms, take a nap, drink a smoothie and then head over to the race. Our plans didn't go exactly as expected, but we did get on the bus about 8 p.m. to head over to the race. Teresa said they were expecting 12,000 people! I didn't think I heard her right and thought it was more like 1,200. Boy was I wrong! It was 12,000! I have never seen so many people at a race. The other one we did in March - the Orange Blossom Half Marathon probably only had about 100 people! This was a horse of a different color!

You've never seen so many port-a-potties in your life! They were lined up all over. I couldn't imagine they needed so many. Not true - and, if you didn't get in line for the bathroom the minute you arrived, you were not going to get to go. We met some nice people in the bathroom line and had some good chats. I met a gal who was running with her dad in preparation for the upcoming Marine Corp. Marathon in Washington, DC. As you'll remember, Teresa is preparing for the NY Marathon the first weekend in November - raising money and awareness for Anal Cancer. You can give right from this site!

Teresa and Missy were in Corral D and Debbie and I were in Corral E. They start you in order of your expected finish time - doesn't say much for Debbie and me. Anyway, they called us to our Corrals about 9:30 p.m. We had to wait until 10:20 p.m. until they let us go. There were people of all shapes and sizes - it was really amazing to see how diverse the group was.

Our plan was to meet up at the end as it would be inevitable that Teresa and Missy would finish well before we would. The race course ran through the Animal Kingdom as well as MGM and then ended up in Epcot. There was lots of music, characters and entertainers along the way to keep us motivated. Also, lots of Disney employees providing lots of encouragement and support - even for us slow pokes.

Well, the good news is - we all finished! Some of us in better shape than others! They should have called it the Whine and Dine! Except, we never saw any wine or food. That part was a scam - not that we were interested in eating or drinking when we were done at almost 3 a.m.! All we really wanted was a place to sit down, a shower and a soft bed.

Teresa did great - averaging about 13 minutes a mile! My average was just over 16 minutes per mile. I was thrilled just to finish as I had hip pain from mile one! Not sure what that's all about - good thing my sister, Anne Williams is a physical therapist.

As for me, this was my last marathon, of any kind. I'll stick to horseback riding!

Posted by Peggy Hoyt at 8:10 AM No comments: